Pruning is the most common tree maintenance procedure. Although forest trees grow quite well with only nature's pruning, landscape trees require a higher level of care to maintain their safety and aesthetics. Pruning should be done with an understanding of how the tree responds to each cut. Improper pruning can cause damage that will last for the life of the tree, or worse, shorten the tree's life.

Because each cut has the potential to change the growth of the tree, no branch should be removed without a reason. Common reasons for pruning are to remove dead branches, to remove crowded or rubbing limbs, and to eliminate hazards. Trees may also be pruned to increase light and air penetration to the inside of the tree’s crown or to the landscape below. In most cases, mature trees are pruned as a corrective or preventive measure.

Routine thinning does not necessarily improve the health of a tree. Trees produce a dense crown of leaves to manufacture the sugar used as energy for growth and development. Removal of foliage through pruning can reduce growth and stored energy reserves. Heavy pruning can be a significant health stress for the tree.

Yet if people and trees are to coexist in an urban or suburban environment, then we sometimes have to modify the trees. City environments do not mimic natural forest conditions. Safety is a major concern. Also, we want trees to complement other landscape plantings and lawns. Proper pruning, with an understanding of tree biology, can maintain good tree health and structure while enhancing the aesthetic and economic values of our landscapes.

Most routine pruning to remove weak, diseased, or dead limbs can be accomplished at any time during the year with little effect on the tree. As a rule, growth is maximized and wound closure is fastest if pruning takes place before the spring growth flush. Some trees, such as maples and birches, tend to “bleed” if pruned early in the spring. It may be unsightly, but it is of little consequence to the tree.

A few tree diseases, such as oak wilt, can be spread when pruning wounds allow spores access into the tree. Susceptible trees should not be pruned during active transmission periods.

Heavy pruning just after the spring growth flush should be avoided. At that time, trees have just expended a great deal of energy to produce foliage and early shoot growth. Removal of a large percentage of foliage at that time can stress the tree.

Pruning cuts should be made just outside the branch collar. The branch collar contains trunk or parent branch tissue and should not be damaged or removed. If the trunk collar has grown out on a dead limb to be removed, make the cut just beyond the collar. Do not cut the collar. 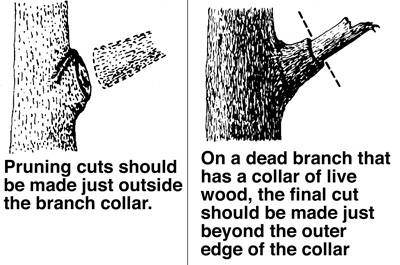 If a large limb is to be removed, its weight should first be reduced. This is done by making an undercut about 12 to 18 inches from the limb’s point of attachment. Make a second cut from the top, directly above or a few inches farther out on the limb. Doing so removes the limb, leaving the 12- to 18-inch stub. Remove the stub by cutting back to the branch collar. This technique reduces the possibility of tearing the bark.

Specific types of pruning may be necessary to maintain a mature tree in a healthy, safe, and attractive condition.

Cleaning is the removal of dead, dying, diseased, crowded, weakly attached, and low-vigor branches from the crown of a tree.

Thinning is the selective removal of branches to increase light penetration and air movement through the crown. Thinning opens the foliage of a tree, reduces weight on heavy limbs, and helps retain the tree’s natural shape.

Raising removes the lower branches from a tree in order to provide clearance for buildings, vehicles, pedestrians, and vistas.

Reduction reduces the size of a tree, often for clear- ance for utility lines. Reducing the height or spread of a tree is best accomplished by pruning back the leaders and branch terminals to lateral branches that are large enough to assume the terminal roles (at least one-third the diameter of the cut stem). Compared to topping, reduction helps maintain the form and structural integrity of the tree. 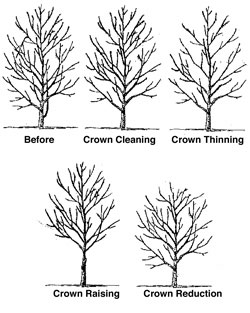 How Much Should Be Pruned?

The amount of live tissue that should be removed depends on the tree size, species, and age, as well as the pruning objectives. Younger trees tolerate the removal of a higher percentage of living tissue better than mature trees do. An important principle to remember is that a tree can recover from several small pruning wounds faster than from one large wound.

A common mistake is to remove too much inner foliage and small branches. It is important to maintain an even distribution of foliage along large limbs and in the lower portion of the crown. Overthinning reduces the tree’s sugar production capacity and can create tip-heavy limbs that are prone to failure.

Mature trees should require little routine pruning. A widely accepted rule of thumb is never to remove more than one-quarter of a tree’s leaf-bearing crown. In a mature tree, pruning even that much could have negative effects. Removing even a single, large-diameter limb can create a wound that the tree may not be able to close. The older and larger a tree becomes, the less energy it has in reserve to close wounds and defend against decay or insect attack. The pruning of large mature trees is usually limited to removal of dead or potentially hazardous limbs.

Wound dressings were once thought to accelerate wound closure, protect against insects and diseases, and reduce decay. However, research has shown that dressings do not reduce decay or speed closure and rarely prevent insect or disease infestations. Most experts recommend that wound dressings not be used. If a dressing must be used for cosmetic purposes, then only a thin coating of a nontoxic material should be applied.

Pruning large trees can be dangerous. If pruning involves working above the ground or using power equipment, it is best to hire a professional arborist. An arborist can determine the type of pruning necessary to improve the health, appearance, and safety of your trees. A professional arborist can provide the services of a trained crew, with all of the required safety equipment and liability insurance. 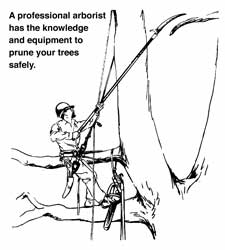 There are a variety of things to look for when selecting an arborist:

Avoid using the services of any tree company that

This brochure is one in a series published by the International Society of Arboriculture as part of its Consumer Information Program. You may have additional interest in the following titles currently in the series:

Developed by the International Society of Arboriculture (ISA), a non-profit organization supporting tree care research around the world and is dedicated to the care and preservation of shade and ornamental trees. For further information, contact:
ISA, P.O. Box 3129, Champaign, IL 61826-3129, USA.
E-mail inquires: isa@isa-arbor.com 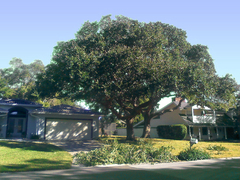 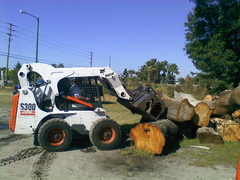 Tree removal can be very dangerous so always use a professional. There are many hazards involved such as power lines, houses, fences, and bodily injury so only use professionals. 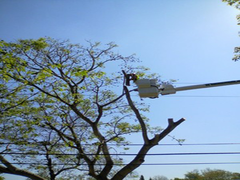 From time to time limbs may have to be removed because they become hazardous like hanging too close to your house, over a power line or they are weak and rotted. 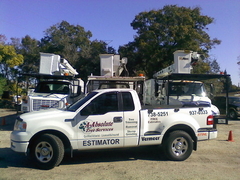 Emergency service for wind damage, trees falling or lightning; we will respond any hour of the day or night to ensure your safety.

For your protection, we are fully licensed and insured, carrying workers’ compensation and general liability insurance. We have ISA certified arborists on staff and a BBB accredited business.